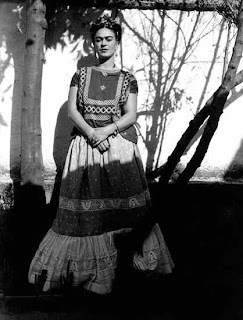 At work, I wanted to produce a work that had a multicultural feel, and being that my Mexican roots cry to be exposed every time an opportunities comes around, I decided I wanted to direct a play about Frida Kahlo, the "surrealist" Mexican painter, married to Diego Rivera, the great Mexican muralist.

Originally I wanted to direct someone else's play but someone above my supervisor decided that I should write the play, after all, I'm a playwright, right? (Obviously, they don't know much about theatre.) And so, the Frida Kahlo Project was born.

From the moment I knew I was going to be the playwright, I started the research. So far, I've read "Frida: A Biography of Frida Kahlo by Hayden Herrera." I watched two documentaries one by PBS titled, "The Life and Times of Frida Kahlo." I revisited the movie "FRIDA" directed y Julie Taymor and acted by Salma Hayek. I also read "Frida Intima," by Isolda P. Kahlo, who is Frida's niece and appears in many of the pictures and paintings.

Right now I'm in Mexico City getting ready to tackle the visits to four different museums found in four different areas of the city. And no, one cannot visit two museums per day; there is a lot of distance to cover from one place to the next. So, I'm visiting one museum per day with the hopes that I don't overload.

You would think that with all this research, I should know what type of play I'm going to write. I don't know. But this I do know: I don't want to write a fictional account of Frida's life based on true events. I don't want to write a play about Frida and Diego; the movie did that and it bored me to death. I also don't want to write a story where everything of emphasis is the fact that Frida suffered, suffered, and suffered some more, which is basically what everyone seems to think when looking at her paintings and reading  about her life.

It is clear I know what I DON'T WANT TO DO. But I'm still wondering what the hell is it that I WANT TO DO. Whatever it is, I hope it comes out in a way that sheds new light into Frida's personal life and artistic achievements while combining Mexican traditions, music, dance, and culture, specially from the State of Oaxaca. Why? Well, because Frida's roots are there hence the reason why she wore a Tehuana most of her life.
Posted by playwright at 6:10 PM No comments: 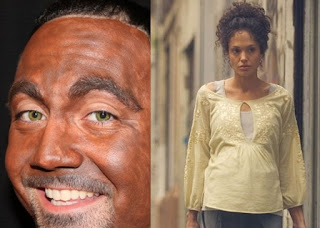 STOP ME IF YOU HEARD THIS ONE BEFORE

I recently attended the American College Theatre Festival, Region IV Conference. It took place in Daytona Beach, FL.  At the conference, I attend many events, especially those dedicated to new work. I do this because I am intrigued by what young people are interested in writing about. These new plays are by students, and regardless of who picked them for the conference, you are bound to be surprised by incredible pieces of work or works that truly don’t deserve to be there.
Take my experience with one of the one-acts from the year before. (Yes, I attended the same conference last year.) The written work was good, the acting was good, the staging was good, the plot, the themes, the story, everything was good, and by the audience reaction, the play did what it was supposed to do: touch the human spirit. Yet I did not enjoy such play. And why is that, you might ask yourself? Well, because I had seen that story, that plot, and those characters before. Literally!
Stop me if you heard this plot before: Two pre-adolescent boys are sexually abused by an adult. Now, as young adults, one of the teenagers is depressed and contemplating suicide while the other has become an introvert and secludes himself to a fantasy world. The story uses flashbacks to reveal the past as the story moves forward in the present. There is a girl who’s also introvert and secludes herself to a fantasy world, as well as parents who are aloof. Have you heard it before? No?
How about this one? Two 8-year old boys are sexually abused by their baseball couch. Now as young adults one of them has become a male prostitute while the other retreats into a fantasy of alien abduction. There is a girl who’s also introvert and retreats into a fantasy of alien abduction, as well as parents who are aloof. The story uses flashback to reveal the past as the story moves forward in the present.  Recognized this one? No?
The first story is the plot of a one-act which won the playwriting competition at Region IV two years ago and as a prize it was produced and presented at the same conference last year. The second story is the plot for an award winning movie titled, “Mysterious Skin” based on the novel of the same name by Scott Heim.
Last year, when I was watching the one-act, I was not amused by the similarities to the movie. And I wondered if any of the students or professors present at the event knew what was happening. At the end of the show everyone applauded the young playwright. I, on the other hand, wanted to go to him and ask him a few questions. But it wasn’t my place, and because I didn’t know any of the judges, I simply decided to keep my mouth shut.
This year, while watching the winning productions of last year’s competition, I sat next to one of the judges, now a friend. During intermission, I mentioned to him my experience with the one-act from the year before. My friend revealed that he was one of the judges for that particular play. He said he had never heard of “Mysterious Skin,” the novel or the movie, and was very disturbed how I recognized the entire plot, characters and story in the one-act. He also mentioned that it would have been nice if I had said something. But, oh well.
The thing that bothers me the most about this one-act incident, and obviously still bothers me because I’m writing about it a year after it happened, is that in order for such one-act to be produced and presented at the conference, it needed to go through a series of steps:
1) Written by the student.
2) Evaluated by the professor.
3) Submitted to the festival.
4) Chosen based on writing quality.
5) Received a staged reading while competing against many other one-acts.
6) Evaluated by a judging panel.
7) If selected, presented as a production the next year.
The play goes through a two year process before making it on stage as a production before moving to the national level. So if two years passed before making it to the stage, is it possible that no one caught on the fact that the student had stolen (my conclusion) the entire plot, story, theme, and characters from an independent film? Is it possible that no one recognized the story when the one-act was presented as a staged reading? (I did not attend the conference when the play was chosen as a staged reading.) Is it possible that no one really noticed the similarities? My biggest regret is not mentioning anything to the judges or to the playwright when the play was presented as a production. But as I said, it was a difficult situation. I wasn’t a judge; I was an audience member, and I was a new face at the conference.
This year, I attended the stage-readings of the 10-minute plays, the one-acts, and the production of the two one-acts which won the staged readings last year. I’m glad to report there were no similar plots to any obscure novel or independent film. There were however, two very horrible one-act productions and those who saw them would agree with me. But that’s a totally different conversation.  One perhaps save for next year.
Posted by playwright at 1:06 PM No comments:

OUT OF SIGHT, OUT OF MIND 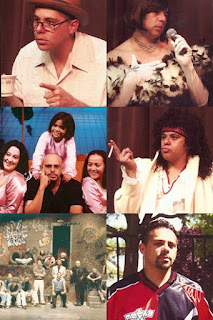